archive of the crinoline: redeem the unredeemable! 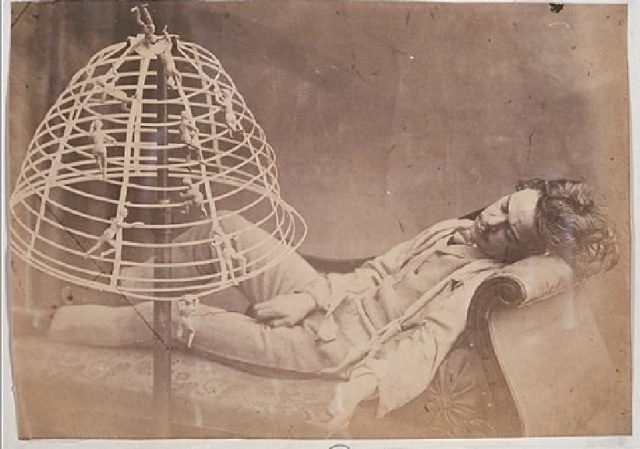 There’s a sorry history of cultural appropriations of the crinoline, often for purposes other than high fashion, usually with the intent of debunking or perverting the gloire of the crinoline’s architecture. This awkward specimen, widely reproduced, sometimes goes by the title of ‘The Bachelor’s Dream’, an albumen print from around 1860, and not, as they say, in the best possible taste, but rather a kind of fairy fakery.

Set against this, consider the use of the crinoline in James Hutchison Stirling’s book ‘The Secret of Hegel'(1865):

“I, you, he, we are not to be left, each to his own opinion of feeling, conscience, spirit ; there must be a guarantee that these are true and right. No one can be trusted in that respect to his own self-will. What is concerned is a rational object, which can be realised by the universal will alone. The feeling of the individual is amenable to the prescriptions of the rational object, nor possesses authority but in assent and consent to the universal. It is not in the power of a single female individual even to refuse a crinoline at present without a creak in the machinery of society, a creak that falls with most pain on the ear of the recusant. This is an extreme case, and a temporary, unjustifiable too, certainly, to universal reason : but, in absolute fact, use and wont, observance, is the true morality. That is the meaning of the Hegelian distinction between (concrete) Sittlichkeit and (abstract) Moralitat. Moralitat is the conscience of the Aufklarung: it demands the right of private judgment place for its own subjective feeling.”

Well, hear hear says the modernist crinolinologist: private judgment cannot be enslaved to fashion, and yet, is there not a saddening of the figure of the crinoline in its use here as an example of unreason. Might not the reverse case be made, namely, that it is cause for some dismay that the universal injunction to wear crinolines has fallen into its modern costume role.

By way of confirming the usual pejorative role afforded crinolines, Stirling, himself, took a break from his philosophical efforts to blog a light sketch on Full Dress, published in ‘The Englishwoman’s Review’ (July, 1859), in which the crinoline is once more figured:

“Fair reader, do not fear! I am not going to touch your crinolines. . . . The base of the pyramid I abandon to avenging fire, or the assaults of Punch; my business is with the apex. In other words, what you name as full dress, or low dress, is offensive to my sympathies and my judgment, and I must remonstrate with you…”

And more of the like, but thankfully the old sexist “fair reader” ploy falls on deaf ears these days, though it will take more than archival dérives to redeem the archive of the crinoline: redeem the unredeemable!